In order to enliven the 75th Anniversary of Indonesia’s Independence Day, the Secondary division held an online sports day event. The activities were carried out online on August 13, 2020 at 08.00-11.00 am in Saint Nicholas School. All students from G7- G12  joined.

The program began with a prayer led by Mr. Horasman, followed by the singing of our national anthem, “Indonesia Raya” and then an opening remarks from Mr. Alfons as the overseer of the event.  In his speech, Mr. Alfons said to the students that they should show nationalism towards the nation by being positive about Independence Day. Even though our country is still hit by the Coronavirus Disease (COVID -19) pandemic, but we still show our spirit of independence and patriotism towards our nation through the series of competition activities.

After the speech, the event continued with a warm-up exercises. After warm-up exercises, then continued with a technical meeting to explain the rules and guidelines of the competition which was explained by Mr. Figur, the PIC of this event. This year’s Sport day holds 5 types of competitions, namely: Kahoot Competition, Push up challenge, Plank challenge, Bottle flip and Speed bounce. All series of competition events are conducted online using the zoom application. 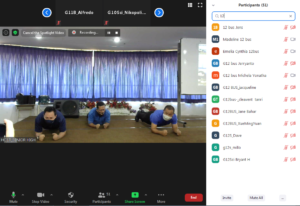 Even though the competition was held online, but the students were still very enthusiastic and eager to participate in the competition. All the programs run smoothly and successfully. This sport day event is an annual program sponsored by Saint Nicholas Foundation to commemorate the anniversary of the Independence of the Republic of Indonesia. (Figur WJ)